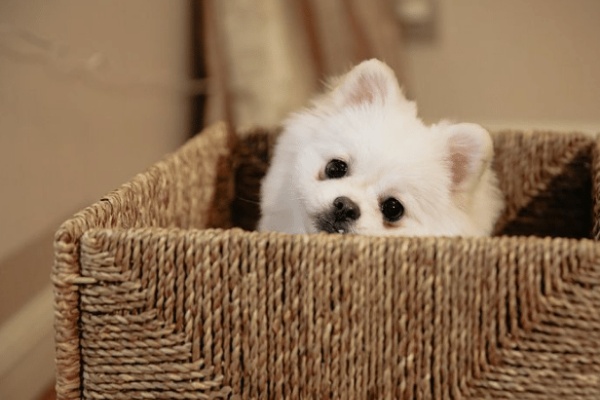 In this post, we will outline and discuss some of the most common Pomeranian behavior issues associated with them, and outline some tips for dealing with these issues.

At first, your cute Pomeranian puppies may be fun and entertaining but, lack of early socialization and obedience training gives birth to a lot of Pomeranian behavior issues you will see in this post.

The Pomeranian is a popular and attractive little dog breed, but it has a few behavioral concerns such as begging, separation anxiety, excessive barking, chewing, and snapping.

The following are some of the most prevalent Pomeranian concerns to be aware of:

Some Pomeranian pups have a good idea of what they want to eat, but they won’t tell you because they can’t communicate.

Revolving taste buds are common in Pomeranians, causing them to take only a few bites or refuse to eat at all.

The majority of owners are concerned about this, although it is a manageable tendency.

A Pomeranian could be able to sense a lack of protein in a dish and refuse to eat it and this can be frustrating.

Pomeranians are notorious for being picky eaters since they are aware that eating the wrong food may bring them pain.

Pomeranians are a naturally non-aggressive little dog breed that has never been known to attack other dogs or children since they were created to be human companions.

Aggression in Pomeranians can be caused by a variety of factors, including poor socialization, fear, anxiety, possessive behavior, and a lack of training or behavioral guidance on the side of the owner.

Pomeranian dogs can bark excessively, and one of the best methods to prevent excessive barking is to properly socialize your Pomeranian as soon as possible.

To get your dog to quit barking, teach him a new behavior. Select a spot that can be seen from the front entrance.

Train them to lie down and stay put when you say, “Go to your place.”

Bring a reward at the door and invite a friend in, but only open it when your dog is calm.

They’ll learn to relax if they desire that treat if you do it frequently enough.

Nipping, barking, self-isolation, digging, and chewing are all signs of separation anxiety in Pomeranians.

Leaving a Pomeranian alone at home causes separation anxiety, which may be addressed by providing a companion or using effective crate training.

Chewing is a natural tendency for all dogs, but if the dog chews on items that aren’t supposed to be eaten, such as shoes, furniture, or electrical wires, chewing may rapidly become a problem.

To keep your dog busy and encourage healthy chewing, provide plenty of toys and chews.

Objects that you don’t want chewed can be removed or sprayed with Bitter Apple, a material that leaves a bad taste in their mouth.

The act of teaching a dog to defecate outdoors or in a specified location within the house instead of following its natural propensity of pooping everywhere is known as housetraining.

Pomeranian housebreaking is notoriously difficult. Expect to practice in sessions for two to three months.

Even after you’ve accomplished toilet training, your Pomeranian may make blunders. However, once you’ve finished, you may expect to see a good dog.

This is one of the most common Pomeranian behavior difficulties. When you have a Pomeranian, try to pay attention to house training.

Pomeranians are not immune to shyness. To identify whether a Pomeranian is shy, it is required to check the dog’s ears.

The ears of a shy dog will tilt back against its skull.

Excessive panting in the dog when surrounded by new individuals, as well as pupil dilation, are both signs of shyness.

To overcome his shyness, it is vital to teaching the dog that there is nothing to be afraid of.

Never pay attention to a dog’s fearfulness, and never comfort a timid dog.

Praise and attention should be lavished on the dog when he accomplishes something new and courageous.

To guarantee that the Pomeranian is adapted to new people and situations, take it to different regions and socialize it with people and animals.

This socialization will surely help the dog overcome his or her fearfulness.

Pomeranian’s enticing smiles, which promote begging, may be tough to resist as the owner.

Begging is bad behavior, yet many dog owners promote it by feeding their dogs while they eat.

Weight gain, digestive problems, and even persistent diarrhea are all potential side effects.

The most basic strategy for preventing this obnoxious behavior is to never endorse it in the first place.

Play aggressiveness is one of the most well-known and well-known sorts of Pomeranian behavior difficulties.

Pomeranians show their play aggressiveness in a variety of ways, including barking, snarling, lunging, and biting while playing.

They are frequently fixated on chasing the ball or continue to play despite knowing when it is time to quit.

It is quite prevalent in Pomeranians since their owners always accept or encourage it because it is the correct thing to do.

Pomeranian plays aggressiveness develops over time and, if left handled, can lead to severe problems with both your children and your dog.

While this may be a nuisance for some, others may find having their Pomeranian follow them around the home seeking love entertaining.

Pomeranians are no exception when it comes to barking, biting, or nipping to attract attention.

A Pomeranian is not for you if you don’t want a cuddly dog or one who requires constant care.

Pomeranians were designed to be companion dogs that spend their days with their owners.

How to discipline a Pomeranian

Here are the common ways to discipline a Pomeranian:

Read more about: 11 Signs Of Pomeranian Dying & Ways To Console Them.