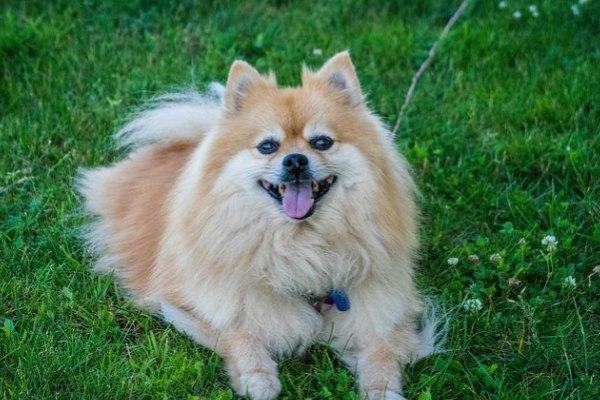 Even as the sound of their barking is funny to hear, people still ask why do Pomeranians bark so much, if that is why you click here! Welcome, let’s find out together!

In this post, we’ll go through some of the most prevalent reasons why Pomeranians bark excessively or unnecessarily.

We’ll also talk about how to keep them from barking excessively. Before we proceed, let me answer your question why do Pomeranians bark so much

Why Do Pomeranians Bark So Much

Pomeranians bark at anyone they see as a threat, which might include family members or even friends. They’re also notorious for barking and earning attention when they want it and want you to play with them and bark at them until they get their way.

Pomeranians have a reputation for being territorial and protective of their territory, which can result in excessive barking.

Pomeranians don’t bark just to bark; there has to be a reason behind it, I see these reasons as bark triggers, let’s talk about it!

Despite their reputation as a gentle breed, Pomeranians can bark excessively for a variety of reasons, including the following:

1. Pomeranians bark due to poor socialization

Your Pomeranian may be constantly barking at humans, cats, other dogs, or pets as a result of inadequate or bad socialization.

Excessive barking and wailing are common complaints among Pomeranian owners, so you should start socializing your puppy right away.

You must train your Pomeranian not to perceive other dogs or pets in his or her neighborhood as a threat if you wish to limit the quantity of barking.

To avoid your Pomeranian barking excessively as a result of inadequate socialization, teach this from the time he or she is a puppy.

When a dog, particularly a little breed like the Pomeranians, wants to be recognized or demands attention from its owner, it may bark or whine until he or she receives it.

Recollect that they were designed to be buddy dogs that spent most of their time with their owners.

Therefore, they are completely reliant on their owners for everything, including affection, food, water, and medical treatment.

If you’re not careful, your sweet little puppy will grow up to be a vicious beast who will bark, hack, and lunge at you.

When Pomeranians are on a routine, they should not begin barking excessively when they need help.

Pomeranians bark incessantly when they hear their family members come home. This indicates that they are happy to see you again.

You’ll hear his or her excited bark as a kind of anticipation for the activity when he or she gets ready or departs for an exercise.

Pomeranian dogs are known for barking loudly to show their joy when chasing a toy or ball.

For example, a Pomeranian could bark and jump over the fence to check whether the other dogs want to play with him.

Pomeranians enjoy barking, and it’s a fun way to communicate with them.

Pomeranian puppies express their joy by barking at everything that makes them pleased.

Pomeranians are not security dogs, although they do make good watchdogs and will alert you if a stranger approaches.

If you have a visitor, expect your Pomeranian to bark; this is typical Pomeranian behavior.

If you live in a crowded city or an area with a lot of strangers, you may assume your Pomeranian barks a lot; however, good socialization is the only way to avoid this.

You will be subjected to these barks on a regular basis if you do not properly teach and socialize your Pomeranian.

Fear is a typical reason for excessive barking in Pomeranians, and it’s usually tied to a socialization problem.

Pomeranians are little dogs that, if not properly socialized, are always afraid of items or pets that are larger than they are.

Some of the most common reasons for fear in Pomeranians are as follows: The region was immersed in thunder, gunfire, fireworks, and a blanket of darkness.

All of this enrages a Pomeranian, who will bark nonstop until the situation is remedied.

It’s a good idea to try to socialize your Pomeranian with other people and sounds to keep them from barking excessively.

6. Pomeranians bark when frustrated or depressed

Various variables contribute to a Pomeranian’s high degree of hostility and excessive barking when he is unsatisfied.

Paying less attention than normal, neglecting the dog, disrupting the dog’s food routines, and so on can all cause unnecessary barking.

Maintain a joyful environment for your Pomeranian at all times, since dissatisfied Pomeranians are more inclined to perform unexpected things.

To deal with an upset Pomeranian, you must first figure out what’s causing the problem and fix it as quickly as possible.

When the Pomeranian wants your attention, don’t ignore them. Examine your Pomeranian to see if he or she is in any distress.

7. Pomeranians bark when sick or in pains

Recall what we said earlier? Pomeranians aren’t renowned for barking, but if they’re wounded or in agony, that may change.

So, continuous discomfort and disease may lead your Pomeranian to bark excessively; however, you can avoid this by arranging frequent medical checks.

If your Pomeranian starts barking unnecessarily, look for signs of discomfort or disease right once.

If a Pomeranian is hurt or in discomfort, he will bark to relieve himself, so keep an eye on him if he starts barking excessively.

8. Pomeranians bark due to separation anxiety

Separation anxiety in Pomeranians is a behavioral issue that occurs when a Pomeranian is separated from its owner for a lengthy period of time.

Pomeranian dogs can suffer separation anxiety and start barking constantly minutes after their owners leave them at home.

Separation anxiety is one of the most prevalent concerns among Pomeranian owners, and it is typically caused by a lack of basic training and care.

Separation anxiety causes Pomeranians to become aggressive against other dogs and humans, as well as barking excessively.

Separation anxiety is also one of the reasons why Pomeranians dig either your backyard or their bed.

9. Pomeranians bark when they have traumatic experience

Traumatic events are real, and they’re one of the most common causes of excessive barking in Pomeranians.

As a result of earlier trauma, rescue dogs suffer from anxiety or post-traumatic stress disorder (PTSD), according to Vetmed.

Any Pomeranian who has previously been exposed to trauma is at risk of having behavioral issues like barking.

Pomeranians that have lived in a harsh or hostile environment are more likely to suffer emotional issues.

They become fearful, hostile, or even excessively bark as a conditioned self-protective reflex.

10. Pomeranians bark to protect themselves

Dogs may bark at people instead of other dogs or deter outsiders from approaching their owners.

Outsiders may prompt a Pomeranian to bark in order to alert its owner, just as dogs do to one other.

Pomeranians are always looking for other dogs to play with. Dogs can’t help but bark at each other.

Strangers will make Pomeranians bark to alert the other dogs of their presence.

Their diminutive stature constantly frightens them, causing them to bark ceaselessly. They feel this is a form of self-defense.

How to stop Pomeranian from barking

The following are some common strategies for educating a Pomeranian not to bark excessively and to control barking:

Exercising and providing your Pomeranian with lots of mental stimulation on a regular basis have numerous advantages.

It has a number of advantages, one of which is that it calms down your Pomeranian and drains its energy, and can cause him to bark less.

This happens because if your Pomeranian gets enough exercise, he gets tired and doesn’t have the stamina to bark.

All he wants to do is sleep. As a result of this, he will have a good night’s sleep. Make sure your Pomeranian has enough brain-stimulating activities.

2. Never shout at a barking Pomeranian

Never yell at a barking Pomeranian; the dog will assume you’re having a good time. Never rebuke a bark with your own censure.

When telling your Pomeranian to come to a halt, talk softly but firmly and at a consistent volume. Teach your dog what the word “silent” means.

Pomeranians are bright dogs, yet they struggle to understand the command “shut up.”

Rather, teach them the command “quiet” and reward them when they respond by remaining quietly after hearing it.

When your Pomeranian barks unnecessarily or for no apparent reason learn ways to ignore the bark and control yourself.

When your Pomeranian starts barking, no matter how bothersome it is, you should never show any emotion, good or negative.

Your Pomeranian is probably doing it to get your attention, so even if you reply, he will win.

It’s crucial to remember that you must ignore your Pomeranian’s demands for attention, no matter how long he howls.

You can only react in specific situations, such as when you observe him barking at something potentially dangerous.

4. Make your environment peaceful and calm

Make a concerted effort to keep your house quiet and comfortable.

Your pet will be aware that he is in a safe and secure environment and is not in danger.

If the situation is peaceful, he should refrain from barking excessively. He’ll become accustomed to your home’s serenity and quiet.

5. Create and stick to daily routine

Keeping a daily plan for your Pomeranian is a simple method to guarantee that they get the most out of the training and course you’ve chosen for them.

Keeping your Pomeranian occupied on a daily basis requires giving him something to do at all times.

Stick to what works for you on a daily basis.

Getting a second pet may be the most effective strategy to convince your Pomeranian to stop barking since Pomeranians rely on their owners for attention and enjoyment.

If you travel away a lot, you should get a second pet for your Pomeranian since they were designed to have a human friend.

While you’re gone, this will keep them occupied, which may help them cope with separation anxiety.

Pomeranians are rarely bored and are unaffected by the presence of other dogs.

7. Avoid anything that triggers fear

Objects that annoy your Pomeranian can be kept away from them or exposed to them at any time.

Call the mailman and introduce him to your Pomeranian if he becomes afraid when he sees him.

As a result, your Pomeranian will recognize that the postman is not a threat and will be at ease around him.

Apply the same strategy to anything else that could elicit a response from your Pomeranian.

8. Try to socialize your Pomeranian

The importance of socialization cannot be overstated. It teaches your Pomeranians a variety of desirable habits.

It teaches him how to relate positively to both humans and animals.

Your Pomeranian may also be lonely at times. Socialization can also help with the solution to this issue.

The key advantage of early Pomeranian socialization is that it instills in your Pomeranian a sense of serenity, confidence, and affection.

A well-socialized Pomeranian is a dog who is sociable to strangers and at ease with other dogs.

With all the above information provided on this page, I strongly hope your question Why Do Pomeranians Bark So Much was resolved!